It has been sometime since a post, and I apologize. For my Marketing 4201 class, I was asked to collect ads throughout the semester that have been communicated via five different mediums. Please enjoy.

Goldstar Beer – Thank God You’re a Man (Appendix A) was a magazine ad out of Israel that won 13 awards in total. 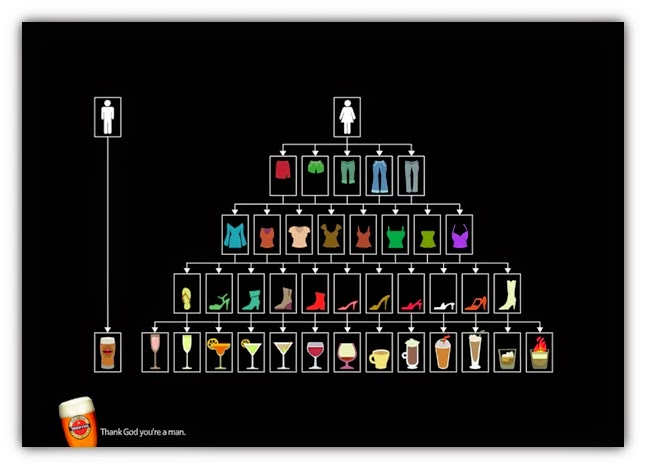 The target market is a broad range of male beer drinkers who seek a sense of community and validation in their decisions.

Through the message “Thank God you’re a man,” it is clear that this brand wishes to position themselves as a community of discerning men who can laugh at the simplicity of their decision-making process.

To target males who can find the humour in the indecisiveness of women and to build a positive rapport with their brand through the message that Goldstar is a man’s beer. (Tempo, 2017)

The appeal of this message is through the slice of life experiences that many have seen, as well as the humour of how complex decisions are outside the thought process of men.

This ad flows from top to bottom, ensuring that after a reaction has been elicited from the consumers the message is further reinforced with the slogan, “Thank God you’re a man.”
Evaluation

Real Life Pac Man #UpForWhatever was aired during the 2016 Super Bowl and garnered millions of hits on YouTube.

The target market for this advertisement are men between the ages of 25 to 34, with a high focus on immaturity. Knowing that 45% of men within this age range prefer beer over any other alcohol, this message is meant to encompass all North American men of all ethnicities (Saad, 2017).

Through the campaign “Up For Whatever” Bud Light has positioned themselves as the product that people associate with a good times and unexpected experiences. By utilizing a symbol that all ages are aware of such as Pac Man, they are able to capture the attention of multiple demographics and ensure they combat the negative connotation of macro brewers. They are perpetuating that men are girl-chasing, party-loving man-children, but fun is their ultimate position.

To target millennial's who value unique experiences and build a rapport with them by watching a childhood fantasy fulfilled that could only be dreamt of before.

Millennials value experience more than tangible products. Bud Light starts with a slice of life appeal at the bar with friends, followed by surprise, fantasy, humour and nostalgia to keep the audience engaged throughout the entire 60-second “story” ad.

This advertisement was able to execute effectively along a timeline that needed to communicate authenticity and retain a genuine feel for surprise and excitement throughout.
Evaluation

Brewed the Right Way - Peach of Resistance (Appendix B).
The brilliance and timing of this ad was that it was done to fight back against the Budweiser 2016 Super Bowl "Brewed the Hard Way" ad. 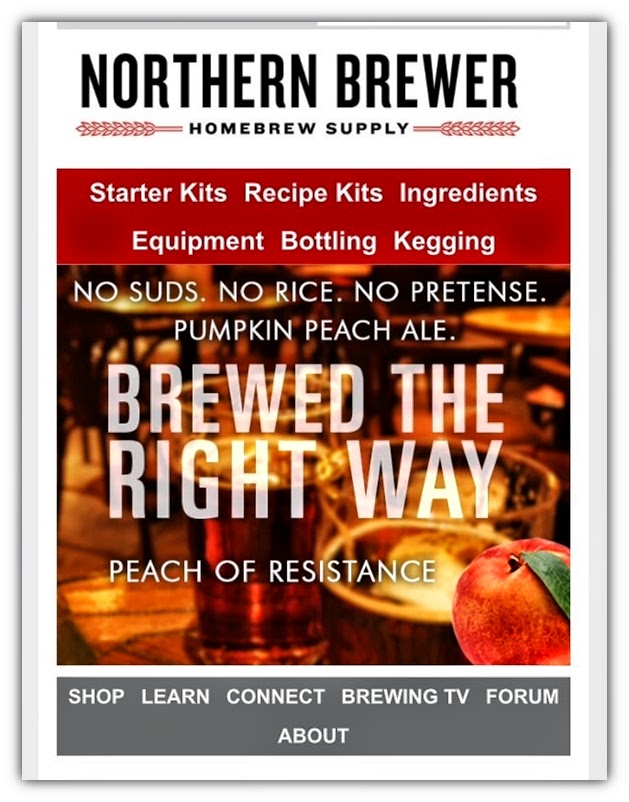 Young, discerning male followers of the craft beer industry who prides themselves upon home brewing.

To position themselves as someone who stands strongly beside the micro and craft brewers and rally this group to fight back against the massive budgets of Budweiser and other macro beers. They want to be seen as an industry influencer who can fulfill the needs of consumers and will not sacrifice their integrity.

To target males who want to stand behind a community of like-minded individuals, fight back against the "big guys" and brew superior beer.

Northern Brewer is using a counter-slogan as a Personality Symbol appeal in which consumers identify themselves with a brand and community.

Drawing consumer’s eyes to the "Brewed the Right Way", they are then able to recognize the font and correlation between Budweiser's "Brewed the Hard Way" immediately. It then further reinforces this by stating that they offer everything that a discerning craft beer enthusiast would want to use to fight back against Budweiser and their mockery of those who might drink a Pumpkin Peach Ale.
Evaluation

Heineken DON’T DRINK AND DRIVE (Appendix C).
This was one of the most compelling campaigns ever crafted for the outdoor market, where consumers through Europe were confronted with massive dented cans in the middle of intersections, and at drinking events. 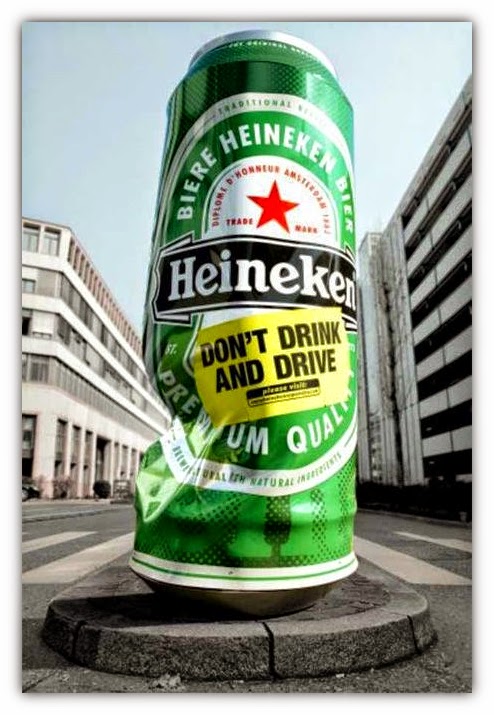 Millenial males who understand the power of this imagery and what it represents.

The strategy for this campaign is to position Heineken as a socially responsible brand and generate a substantial amount of Goodwill for their consumers.

To reinforce the message for millennial consumers to drink responsibly while also pushing traffic to their website at www.enjoyheinekenresponsibly.com.

A can that has been visibly dented by an automobile speaks to the problem instantly through fear, unstated assumption and shockvertising appeals.

Deployment of this item was throughout pedestrian crosswalks, traffic lights and parking areas of outside concerts. Each location selected was to ensure communication with the right target market and where they may pass through frequently or congregate.
Evaluation

The dented can pillar made an immediate impression not only with the public but with the press nationwide and the strongest was through the automotive press (Toxel, 2009).

Guerrilla Indus Pride Beer (Appendix D) chose to run a campaign through India's massively underutilized transit system. The overhead handles that are used to stabilize a traveler on a train were converted into plastic beers handles to advertise Indus Pride Beer. 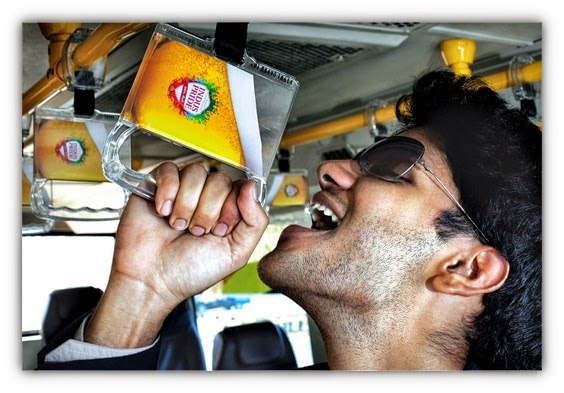 Millenial males who find the humour in this style of guerilla advertising and want to indulge in gripping the overhead handles in different ways.

The goal for this campaign is to position Indus as a trendy brand that can be engaged with by any commuter in India and to be a source of buzz.

To deliver a message of fun and humour that all others can enjoy throughout their public transit commuting experience in the hope they wish to replicate the faux drinking experience in real life.

The fantasy of drinking out of the mug, even if done in jest, has an appeal of humour and a slice of life. This represents a conflict in our lives, where we'd rather be somewhere else than where we are right now. It works well because it is unique and eye-catching, involving some laughs if used in the right context.

It was executed well throughout all of the transit system in India as a massive production, which was eye-catching, unique and engaging. Although there's no way of communicating only with the male demographic through it, men are most likely to appreciate the humour and resonate with the desire to have a beer.
Evaluation

People do not watch ads, they watch what interests them the most and remain engaged until this illusion is broken. This ad was able to able to effectively communicate to their core audience without directly selling to them and because of this, it was the best advertisement from this report. The ad selected as the best was the Real Life Pac Man #UpForWhatever.
The counter-argument can always be made that majority of beer ads focus on men who are sex crazed partiers with the maturity of a teenager, but it is this side of men that we can laugh at and enjoy. Even if men do not relate at this exact moment in time, the message still resonates with the experience seeking side of them and the simplicity of fantasies.